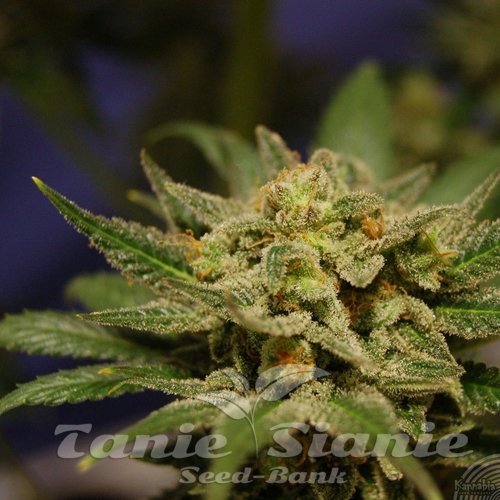 This variety gets its name from its citrus appearance, changing from a lemon yellow to an orangey shade. Sticky like its pulp. The flavour, while still fruity, tends more towards fruit gums, confirming its Bubblegum connections.The Citral strain is one of the best known in Europe, particularly in Spain, Portugal and the UK, where it enjoys legendary status among more experienced growers. It stands out for its adaptability to the most extreme climates, including mountain areas, thanks to its origins in the Hindu Kush. The variety has been selected and improved by self-fertilisation. Unfortunately, we lost the original mother a few years ago, but not before stabilising a cross with a Kush variety that was brought from Iran. A predominantly indica hybrid, short in stature and with little branching.It produces a large amount of resin and the branches produce dense, compact bunches of flowers. But although the typical Citral flavour was still present, it was masked somewhat by the toughness of the Kush flavour. That’s why we decided to cross it with our most flavoursome Bubblegum, resulting in a plant with an amazing mixture of flavours. Trying it is like sipping a tropical-fruit milkshake. It’s a tough plant, highly resistant to fungus and insects and very easy to grow.
The Bubblegum contribution to the final structure can be seen on the lower branches, which produce lots of heavy buds. We recommend extending growth to allow these branches to grow, as they can produce a considerable number of flowers. Although a thick central bud will form, we recommend topping to achieve several main branches. It produces a large amount of trichomes, which, together with the yellowish tint that the buds take on as they ripen, make the plants look as if they’ve been bathed in honey — reminiscent of how “charas” is extracted in the Hindu Kush.
Flowering may take up to 60 days indoors, although less will usually be sufficient and some specimens may be ready within 53 days. It’s a very good plant for outdoor growing, as it will be ready for harvesting by late September. It’s a high-yield cross, generating over 500 grams per square metre indoors and over 400 grams per plant outdoors, where it can grow to occupy an area of several square metres.
It produces delicious hash and we recommend trying this variety with a vaporiser.