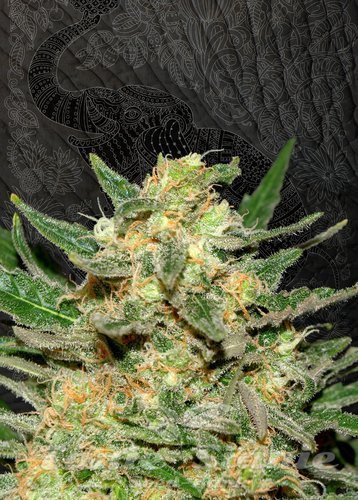 We decided to keep the name of this variety because we wanted an exotic name for our most tropical variety, with genetics brought over from the other side of the ocean. It is a cross between Maple Leaf indica and Citrus. The result is an explosion of flavours and smells.
The plant has a sativa structure but with marked indica-type behaviour. The flowering time is between eight and nine weeks indoors, while outdoors it should be ready for harvesting by the last week in September. It develops dense, fat, tight, compact central buds from the fifth or sixth week of flowering.
It is a very sturdy plant that is highly resistant to insect and fungus attack. The features of its Caribbean, Afghan and Indian ancestry combine to give stability to a cross that outdoors creates a bush with large buds and slim leaves at the tips, and large leaves on the lower branches, which end up covered in trichomes.
The buds start to flower energetically until they’re fit to burst, giving way to an explosion of trichomes that cover the buds as if you had spilled cups of sugar all over them. From the first days of flowering the plants give off a very strong aroma of coffee and pine air-freshener. An electrifying high to start with and heavy at the end, to enjoy this variety’s fine balance between indica and sativa to the full.
For optimal growing the plant needs quite a lot of food right from the beginning of its life cycle but particularly during flowering, if the buds are to harden properly and not stay “floppy”. Regular pruning and growing in SCROG is highly recommended for the best possible yield.
Using five-litre pots you can get the very best out of this variety, as it doesn’t need to grow very tall to form a large, heavy central bud. It does need a lot of light, so we recommend growing outdoors. Indoors, try to bring the lamps in during flowering.
During the flowering cycle we have gradually increased the EC from 1.2 to 2.2, week by week. Carbohydrates (or molasses) are highly recommended to bring out all the flavour when Thai Fantasy is smoked.
This is a variety that is surprisingly easy to grow and gives a surprisingly high yield.